Dictionary of philosophical practice as an invitation to co-creation 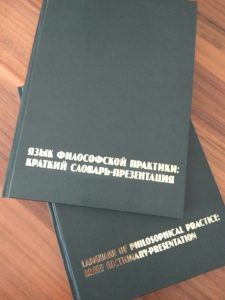 The dictionary enables readers not  only to  understand  the basic concepts that have become most widespread in phil- osophical practice, but also to outline for themselves a scope      of their own interests in this  field.  Most  of  the  articles in the dictionary are written in a projective style, they  involve  the reader in a discussion of open problems, and do not impose one single point of view on the directive. Thus, any reader can become a co-author  of  each  article  due  to  his  or her own reflections, professional and life experience. and it should be so, because the most important philosopher for a person is him- or herself. Philosophical practitioner, if we take advantage of the paradoxical statement of Gerd B. achenbach, is a specialist in a non-speciality, s/he treats his/her visitor seriously: a person is understood not with the help of theories, that is, schematically, and not as “an example confirming   a rule”, but as that unique human being that s/he is. it is not judged in accordance with a certain “measure” (for example, “health”). The question is, rather, whether s/he lives in har- mony with him- or  herself.

According to L. Amir’s witty remark, in the practice of education a “non-serious” attitude to philosophy was formed. an example of this attitude is a solid university professor who believes that the philosophical theory is too abstract and has nothing to do with everyday life. However, it is only through the practice of communication that you can actually learn what the difference between serious (but unnecessary) self- giving and serious (really necessary) attitude to your work is: you must take your work seriously, but not to yourself.

Professor of philosophy, who believes that his discipline does not apply to life, is not serious about his or her pro- fession. if s/he were serious about his/her profession as a teacher of philosophy, s/he  would  participate  in  philosophi- cal  practice,  due  to  the  fact  that  good  teaching  implies deep penetration into the subject and the ability to communicate. Moreover, even if this professor “simply” teaches philosophy, s/he can without special training be a philosophical practitioner. all  that is  required is  simply to  be  a  good philosopher, that  is, a person who does not avoid direct contact with a student      or client (the same student), is enthusiastic about his/her profession, strives for the essence, knows how to listen, ask questions, explain and clarify. if so, there is no gap between academic philosophy and philosophical counseling. Therefore, many articles of our dictionary are devoted to the integra-  tion of philosophical practice  into  the  practice  of  education for children and adults, which is  an  adequate response to   the  challenges  that  modern  education  poses  to  education.

Philosophy is a universal “thing”, because it includes all knowledge, everything that has been thought out, investigated and learned belonged to  it;  the  whole world of  knowledge  in all its diversity is based on philosophy. it finds access to everything, because earlier its original element was already present in any knowledge, opinion, even feeling in the quality     of thinking in a very broad sense.