I have had an honor to communicate with 7-9 years old children from Montessori-center “Shkola razuma” (“School of Intellect”) in the framework of the “Philosophical Conversations” training course developed by me. The top priority of this course is to form personal, metasubject and subject results of the mastery of primary school principal educational program. It greatly predetermines the successfulness of further education, develop interest in study, ability and willingness to learn. I dare to hope that this course makes the contents of education the most practical, i.e. aimed at the concrete ways of mental activity, the use of acquired competences in real life, in the context of philosophical discussion. As a training material, I use full of philosophical meaning novels (cartoons based on G. Oster). 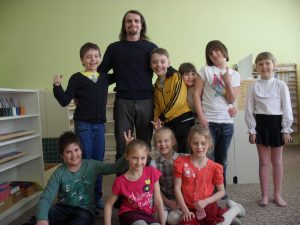 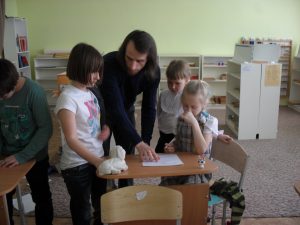 It is not difficult to see that children of primary school age express their attitude to the world around through emotional orientation. According to L.S. Vygotsky, the age of 7 is the beginning of the differentiation process between external and internal aspects of child’s personality. This process causes a lot of new experiences. An experience is any emotionally colored state and the phenomenon of reality experienced by a person and perceived in his consciousness as an event of his own life. For example, such ethical categories as Good and Evil, a child of this age perceives through emotional field, while his own emotions, which he is able to interpret by himself, he expresses through Good and Evil concepts (good or bad).

At this age, the first model of world is being formed. It is emotionally colored and connected with emotional-visual way of cognition. If to accept non-classical theory of multiple intelligences by H. Gardner (Gardner, 2011), this model can be called “emotional intellect”. Intellect is considered a potential, which enables a person to use the forms of thinking, appropriate for the particular types of the context. The simplest unit of “emotional intellect” model is an experience. It is difficult to say upon what this unit is conditioned. This can be either child’s specific characteristics or outer world influence. But it is an experience that is the key part of “emotional intellect”. Since the first meeting, I try to direct children’s attention to reflection of the experiences, which are emerging in the process of everyday world exploration and self-determination.

Since the first meeting, I try to direct children’s attention to reflection of the experiences, which are emerging in the process of everyday world exploration and self-determination. 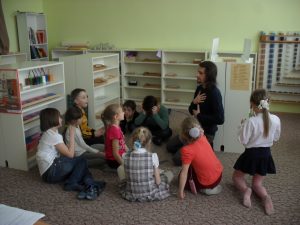 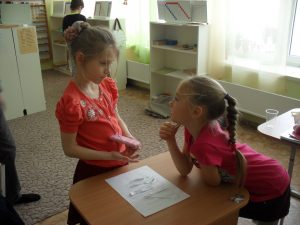 “Emotional intellect” can be seen as the social intelligence substructure, which includes ability to monitor one’s own and other people’s emotions, tell them apart and use this information to control thoughts and actions.

Focusing on “emotional intellect” model, we can develop, on one hand, cognitive skills through recognition and identification of emotions and, on the other hand, personal capabilities, which, in their turn, are being formed from behavioral (emotional self-regulation) and sensitive (emotional expression, emotional sensitivity, empathy, etc.) For example, self-knowledge is, first of all, the ability to identify one’s own emotions, know them and know one’s strengths and weaknesses. If any research task is being formed in terms of joy, it is more likely that positive-affective states will help accomplish it. A good mood and positive emotions contribute a lot to mental flexibility and original ideas elaboration. Thus, the key function of positive emotions is to enhance and form personal cognitive resources.