In his later period M. Heidegger turned to the concept of Light. In German, the Light sounds like Lichtung. Let’s figure out what is the gleam and why this is about philosophy, and moreover, philosophical practice.

Ivan Konstantinovich, who is famous for his “reflections” on the sea, help us with it. Pay attention to his “Wonderful Journey” 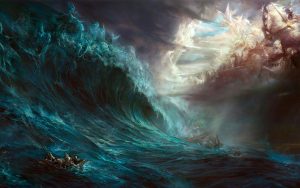 Certainly, direct analogies with our daily life are absurd. And yet, something close to the being of each of us could be grasped by I. Aivazovsky. And this closeness is an alternation of light and darkness in life. Our daily life is not the eternal glow of light; it is not an impassable storm either. This is what the middle between them.

The essence of philosophical practice is to seize and fix this light, which from time to time shows us from above. Or, according to M. Heidegger, to be able to rise from the lowlands of anxiety to the peaks of contemplation (quoted in the “Die Zollikoner Seminare”).