Skip to content
Dear friends & colleagues,
Our bold team from the Department of Philosophy of SUSU for this summer has already visited the XVth International Conference on Philosophical Practice (XV ICPP) in colorful Mexico City (Mexico), methodological seminar on the picturesque shore of the lake Zyuratkul, and now we are preparing to go to the mysterious Beijing (China) to participate in the XXIVth International Philosophical Congress (XXIV WCP). Everywhere we present the project of the Department of Philosophy of SUSU – PHILOSOPHICAL PRACTICE. Moreover, in Mexico we got the right to hold the XVIth International Conference on Philosophical Practice in Russia. 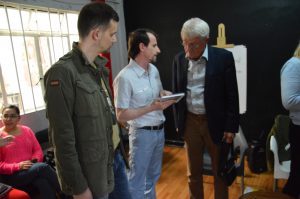 Photo: Sergey Borisov and Kirill Rezvushkin present the book “Philosophical practice: brief dictionary-presentation” to Gerd Achenbach
It remains to answer the main question: why does Russia need philosophical practice?
This formulation of the question is not accidental. In pre-revolutionary Russia, philosophy existed only as a branch from the great Russian literature. Remember at least Fedor Mikhailovich or Anton Pavlovich. Great writers and philosophers? In Soviet Russia, philosophy has become an integral part of ideology and firmly entrenched in universities.
Today, philosophy is “swept out” of these universities. It’s not a reflection on the topic, it’s good or bad (personally for me, as a professor of philosophy – this is fundamentally bad, but this is only a subjective selfish position). The question here is another, how can philosophy exist in modern Russia.
One of the options may be philosophical practice for several reasons:

Therefore, I invite you to join our ranks (at least in Russian), and, of course, to participate in the upcoming conference, for details about which follow the news.