Practice is a phenomenon far from a new in the world of philosophy. Philosophers from ancient times practiced a lot. It was well described by two Frenchman from the XX century, Pierre Hadot (“What is ancient philosophy”) and Michel Foucault (“The History of Sexuality”, Volume III “Caring of the self”).

Karl Marx in his eleventh thesis on Feuerbach directly stated:

Philosophers only explained the world in different ways, but the thing is to change it.

And the thesis earlier, he explained what change is involved:

So, of course, we are not talking about revolution (although not always about it) today, using the conjunction “philosophical practice” or directly practicing. Nevertheless, in the discourse of modern understanding of philosophical practice the figure of Karl Marx is significant. And not for one reason only, that he introduced a practical understanding of philosophy into theoretical discourse. Through his works, including “Capital” and “Economic and Philosophical Manuscripts of 1844,” he laid the foundations for understanding the phenomena of the market and commodity-money relations.

On October 20, our good colleagues from the Chelyabinsk Culture Institute will hold a rather curious meeting. This will be a round table “The concept of consumption of K. Marx: from the XIX century to the XXI”. The round table will be held in the favorite manner for philosophical practice – free discussion.

Come! Talks promise to be interesting! 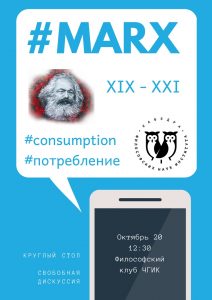